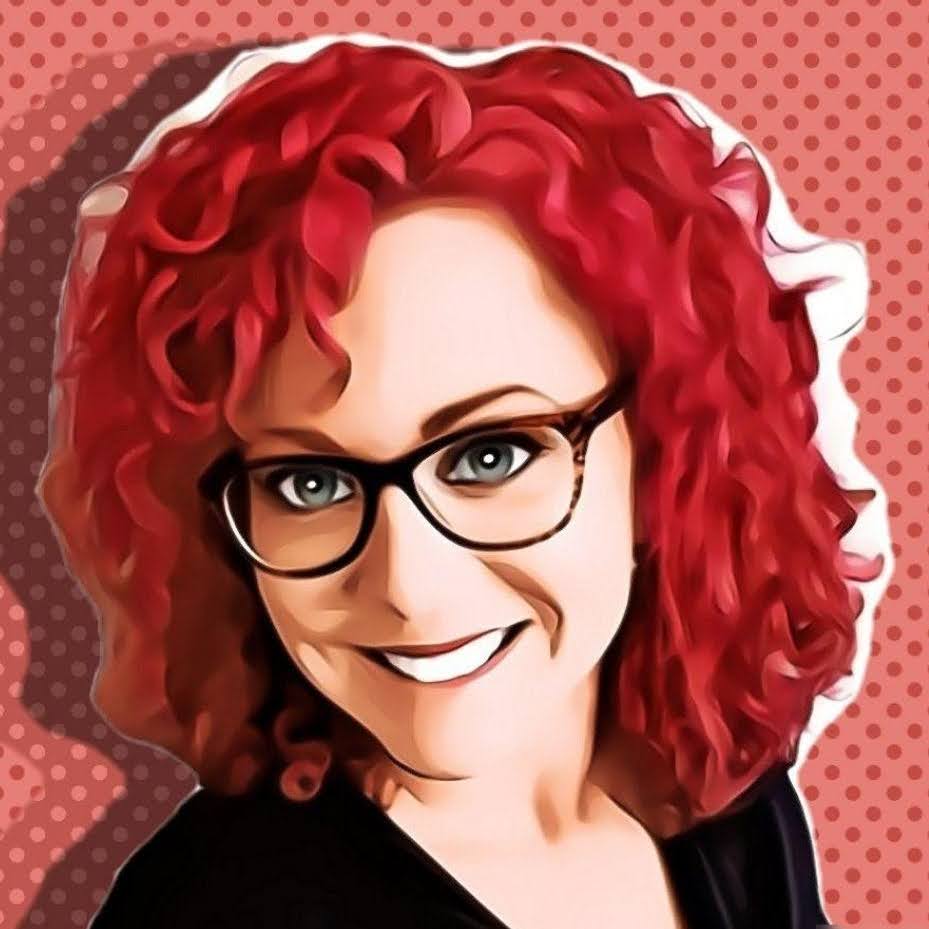 My brain hurts, make your own pun for the title. It’s like choose your own adventure!

So as the weather changes, and my natural crafty inclinations swing back toward sewing, I’ve been hard at work making spring/summer things for the kids and myself. If you’ve been following my Instagram, you’ll have seen the monstrous piece of cotton fleece I ice dyed to make myself some shorts, and the spring softshell jackets I made for two of my kids. I’m exceptionally happy with how those jackets turned out, but I have to say, they were not easy for my sewing machine.

I used the vintage Kenmore for all of it, (well OK I used a serger for a couple of bits on the second one) as I simply don’t think my modern Kenmore could handle 5+ layers of softshell, especially with zipper tape thrown in the mix. The foot clearance is lower on the modern machine, among other things. As it turned out, it was even hard for Gert (the vintage machine) to get through in a few spots. But with persistence, a hump jumper, and lots of hand-turning, (and swearing) we did get there in the end, and the jackets are fabulous.

But, it took forever in those spots. Several tries. Skipped stitches. Bent/broken needles – I think I went through six needles on one jacket! It’s not ideal. But what to do? I want to make more jackets, how do I make it easier? I don’t need another regular domestic sewing machine. Gert pretty much has the most powerful motor you’ll find on a domestic, along with the all-metal construction and extra high foot clearance, so if it’s tough for her, it’s likely gonna be tough on all of them. I know the pros love Bernina, but I don’t need to spend a bundle on another machine to find out it has the same limitations, y’know? Do I muddle through on Gert? Try something else?

Realistically, I know an industrial machine is probably what would handle the bulk best. But I can’t afford an industrial machine, can I? (We know where this is going already, don’t we?) I have actually been toying with the idea of getting one for a while. It seems like a good thing to know how to use one. A marketable skill is a marketable skill, right? I’ve even thought about taking classes at a local college, pre-covid, but that involves leaving the house. I’m not a fan of that at the best of times, ha. Turns out there is a near endless supply of industrial machines on Facebook Marketplace and Kijiji in my area. Like seriously, so many. And I was shocked by how inexpensive some of them are. So, it wouldn’t be a huge investment to pick one up and teach myself how to use it. But what do I even need in an industrial machine? Great question. I’ve never used one – never even seen one in person – but hey, that hasn’t stopped me before, ha.

I did as much research as a person who doesn’t know what they’re doing can do, and settled on this beast, a Pfaff 463 straight stitch machine. It’s quite old, I believe, but it’s in great shape, and after a clean and oil, it hums along quite nicely. (At 100 miles an hour.) Is it vintage? I have no idea, haven’t looked into dating it yet. It isn’t a walking foot machine, so it’s not really designed for doing leather/upholstery kind of stuff, but it can handle thicker layers with adjustments to the presser foot and thread tensions. Since the jackets I have made in the past were possible on a domestic, I’m confident this Pfaff will be able to handle it, at least for the amount of sewing I do. Wouldn’t necessarily want it to be used in a factory for jackets all day every day, kind of thing, but it should be perfect for occasional use on heavier stuff, and holy MOLY did I mention it goes fast?! The motor is 1/4 HP, apparently one of the smaller or less powerful industrials, and it still goes like a bat out of hell as compared to the domestics.

Why did I choose the Pfaff in particular? Well a few reasons: firstly, the price and location were perfect, but more importantly, the manual is readily available online, as is the service manual (important if something is wrong), it takes a fairly standard size bobbin/bobbin case, and needle system, all of which seemed easy to find as well, and when I was Googling before purchase, I found a video on YouTube of a gentleman pulling his apart for a full restoration. I saw that parts are available on eBay, so I was fairly confident that if something was broken I would be able to fix it, or that a technician would be if I wasn’t. (I have since realized that the oil reservoir, a plastic piece, doesn’t seem to be available anymore, at least that I have found, so I am thanking my lucky stars mine isn’t broken.) I looked at several other machines that had very little information available online, and it just seemed too risky for someone who doesn’t know what they’re doing to begin with.

Thanks to that restoration video, I was prepared for the gear box to be filled with sticky disintegrated sponge, which it was, and since the sponges are no longer available either, have rigged up something that should hopefully work just fine. I was also pleasantly surprised to find that when I opened the gear box, mine seems to have a metal gear where I was expecting a white nylon one. Unless it’s some kind of black plastic…it really felt metal to me though. I’m not opening it up again right now to double check, but in any event, if it is plastic, that gear doesn’t appear to be cracked, another good thing. Perhaps mine is older than the one in the video? Maybe that part has been replaced at some point? Impossible to know, but I am happy for the time being.

Inside the needle bar area it was actually pretty clean, given that the rest of it was quite dirty. In the restoration video, when he opens that area, THE FLUFF!! This one clearly hasn’t been used as much. Most of the dirt appears to be dust that accumulated in open areas, likely from being stored for however long.

Of course, now begins more learning. I am waiting on a thread guide (snapped one in transit, and the other piece that attached it was missing anyway) from eBay, but even without it, it sews fantastically with heavier thread. I have been Googling my face off as to what weight of thread is appropriate, and learning what the various tex numbers mean. I have tex 30 in it at the moment that is shredding when I sew in reverse, but this could be due to the missing guide, so I’ll reserve any further testing until I have that. The bobbins I ordered are a touch smaller than the ones that came in it, but after a back-and-forth with the supplier, they are the correct bobbins, and they do seem to work, although I don’t like how they are winding. Again this could be related to the thread guide, so I’ll dig deeper into that later.

Already I have discovered how little I know. For example, I couldn’t figure out why it was so HARD to turn the handwheel by hand. It sews so nicely, this makes no sense. Well, it turns out that on a clutch motor that has a brake, you have to slightly depress the foot pedal to release the brake pad before you can easily turn the handwheel. I guess I have a brake, ha. Thanks be to Google and sewing forums, I don’t know what I would do without them. I found a YouTube video about learning to use an industrial that I will sit down and go through at some point, and hopefully I will be able to control the beast enough to make something soon. I also need to replace the gooseneck lamp, as it doesn’t work, but I want to order it with thread, so it all hinges on receiving that thread guide first and seeing if the thread I have is too thin. (I hate waiting.)

Of course, I also have to figure out where to put it. It can’t live in the garage forever. I sew in the basement, but I have taken over every available inch of space in my area with tables, knitting machines, etc.. It looks like I am going to have to lose one of my beloved Ikea corner desks, which means I’ll lose the storage underneath where I’m currently storing fabric in bins, as well as my cutting table. BUT, I can get a smaller table to the side to have some table area, and I think if I’m clever enough with under-desk shelves or something, I will be able to store my embroidery machine and have space for some of the fabric and yarn hoard. Yes, I could get rid of some fabric or yarn as well, and it may come to that, but first we’ll try shelving 😉

I hope to show off an actual project made with it soon, but in the meantime, here is some test sewing on blue shop towels (the struggle of having to trek down to the basement for more scraps is real.) If you have hot tips for the budding industrial sewing machine user, drop them in the comments! 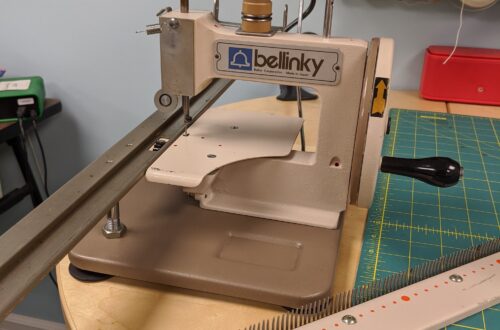 This site uses Akismet to reduce spam. Learn how your comment data is processed.

Another day, another loaf. This time with the prop

"I thought there would be more drinking than sweat

Second and first (wanted the best looking one in t

All I've done for two days is look at pictures of

Day 14 for this sourdough starter and we FINALLY h

First time using blanket stitch. I like it! Althou

The downside of working with sweater knit. The ups

Had a burst of hot weather this past week (long go

Installing the Superba Forma on a Superba Knitting Machine (no motor)